Congress opens door for all 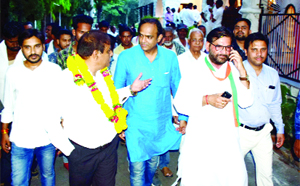 Suspended, sacked workers would get reentry in the party. Chronicle Reporter, Bhopal, Congress would give reentry to its suspended or sacked workers. Party workers and functionaries who have been suspended or sacked due to various reasons would have to submit a written application to entry co-ordination committee for getting reentry in Congress. Those workers and functionaries can also apply who had been expelled from the party for six years. This decision was taken at a meeting held at State Congress Headquarters under the chairmanship of coordination committee convener Indrajit Kumar Patel. Meanwhile, with Kamal Nath at the helm of affairs in the state the party workers are enthused and hope the party can perform well in the year-end elections as it has won few recent by-polls. Party cadres believe the Congress can come back to power because the people of the state desperately want a change. Whether it is on social indices like IMR, MMR, malnutrition and education, or crimes against women, Dalits and children, Madhya Pradesh is at the bottom of the spectrum. A large number of people in the state depend on agriculture and feel that they have neither been getting their due nor any real and meaningful sympathy despite a large number of farm suicides in the state. Along with this, corruption has become rampant in the state and has infected every level and arm of the government. There is no respect for government administration and credibility of government is at an all-time low; ideas like the “Ministry of Happiness” only underscore the grave intellectual and policy-level bankruptcy of the government. The only visible signs of any development in the state are roads and improved electricity supply, but these too are now crumbling because of corruption and mismanagement.The next meeting of the coordination committee would be held on June 11.

Sachin Pilot will not quit Con

Mohun Bagan not to celebrate M

Second Phase of Tests of Russi